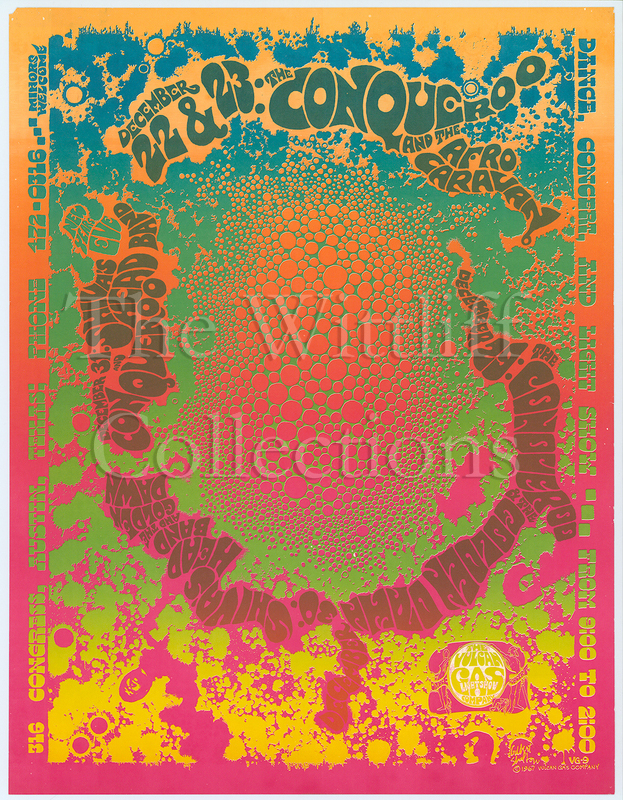 Austin’s musical roots run deep, and one can trace significant developments to the early part of the twentieth century. Yet the emergence of Austin as a center for progressive music and culture accelerated rapidly in the 1960s. As innovative and genre-defying music flourished in Austin during this revolutionary decade, so too did radical lifestyles.

The opening of the Vulcan Gas Company in 1967 marked a significant turning point in the history of Austin music, art, and underground culture. One had to travel to New York or the West Coast to find another psychedelic ballroom that regularly hosted avant-garde rock-and-roll acts like the Fugs, Canned Heat, and the Velvet Underground and living legends of the blues like Big Joe Williams and Big Mama Thornton.

Following the demise of the Vulcan Gas Company in 1970, the opening of the Armadillo World Headquarters would help Austin establish its status as one of the most vital music scenes in the country. Poster artists visually defined the music and culture of Austin during this pivotal period. Their work not only advertised performances. These posters sold a lifestyle that permeated the city and reflected Austin’s transformation from a sleepy university town into a veritable island of underground artistic and cultural activity in the state of Texas.

Click the Table of Contents to enter the exhibit.