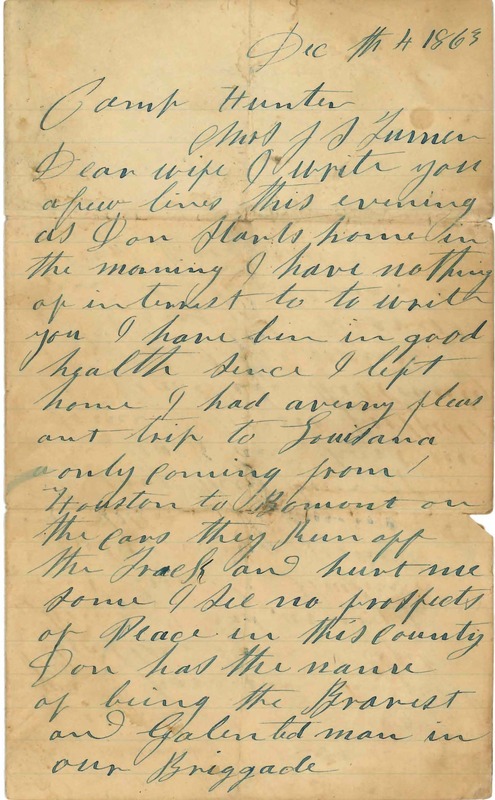 This letter from a Confederate soldier, P.D. Turner, to his wife is located in the Claude Elliot Collection. Elliot received his B.A from Texas State in 1923 and would later return as a faculty member. He also served as registrar and would later be the Dean of The Graduate College at Texas State.[1]

Prior to the Civil War, the author of the letter, P. D. Turner, was a farmer in Colorado County, Texas where he had a wife and one child.[2] He was also appointed as a secret agent by Governor Sam Houston to investigate the activities of the Old Law Mob, a group that was terrorizing frontier settlers in Texas during the 1850s.  Houston eventually recalled Turner due to his lack of progress in the investigation.[3]

At the time the letter was written, December 4, 1863, Turner was assigned to The Third Texas Calvary, Arizona Brigade under the command of George Madison.  As the letter indicates, Turner had recently returned from “a pleasant trip to Louisiana.”[4]  This is likely a reference to The Third Texas Calvary’s participation in combat actions in Louisiana which included a raid on Plaquemine.[5]  The date of the letter also coincides with the unit’s return to Texas in December of 1863. Turner’s unit would eventually participate in the Red River campaign and would later return to Texas, where they remained until the end of the Civil War.[6]