Prose, Poetry, and Son of the Southern Confederacy by Jake Dromgoole 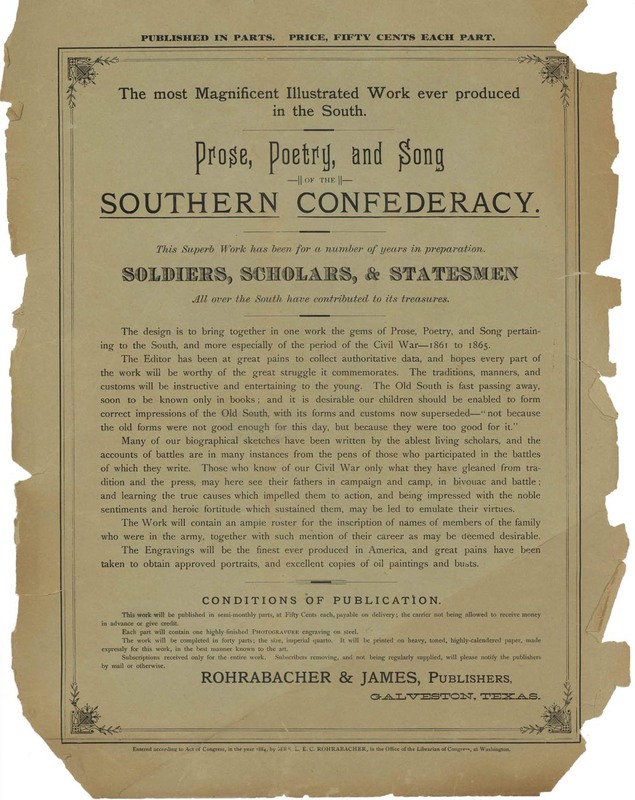 Published by the Rohrabacher & James Publishers in Galveston, Texas in 1884, Prose, Poetry and Song of the Southern Confederacy is a celebration of the Antebellum South and the Confederate soldiers who took part in the Civil War. Published in multiple parts, the purpose of this document (which declares itself “The most magnificent Illustrated Work ever produced in the South”) was meant to both educate and entertain youngsters in the ways of the “Old South.” Focusing on the “Lost Cause” of the Confederacy (the notion that the campaign of the Confederacy was a noble and admirable cause), Prose, Poetry and Song is what many would consider “revisionist history.”Comprised of anecdotes, poems and pictures provided by “soldiers, scholars, & statesmen” all in praise of the values of the Confederacy, this multi-part document encapsulates a life long-desired, yet desperately out of reach by veterans and admirers of the South.

Nineteen years after the end of the Civil War, sentiments towards the conflict were still high throughout Texas. For example, in 1884 there was a gathering of ex-Confederates from all over the state and country held in Dallas, assembling representatives (including prominent Galveston citizen Colonel W.L. Moody), in celebration of their Lost Cause. According to author Christian McWhirter’s 2012 book Battle Hymns: The Power and Popularity of Music in the Civil War, poetry anthologies celebrating life in the old south began seeing production as early as 1866 with War Lyrics and a year later with Gilmore Simm’s War Poetry of the South.[1]

This document, though incomplete, will benefit the study of the southern sentimentality towards the Civil War long after the fighting had ceased. It provides its readers with an understanding of the deep faith in The Lost Cause, and its faithful’s unwavering dedication to life in the old south.

[1] Christian McWhirter, Battle Hymns: The Powers and Popularity of Music in the Civil War, (Chapel Hill, The University of North Carolina Press, 2012), 194.