Family businesses create a city. Their stories and hard work build a community and set a precedent for years to come. The same can be said for The Pennington Funeral Home which has been a San Marcos, Texas staple since 1897. Originally located in the Simon building, A. B. Rogers owned the A.B. Rogers Furniture Company but then moved locations to the A.B. Rogers building in 1907 which was on the corner of Hopkins St. and N. LBJ Dr. While Rogers continued on as an entrepreneur, building the Rogers River Resort and golf course, he sold his business (which was now called Undertakers and Furniture), to his employees Willard and Ella Pennington in the 1943. When they bought the business, they changed the name once again to Rogers- Pennington Funeral Home and had it changed one final time to Pennington Funeral Home when they moved to their current location at 323 N. Comanche St. in 1956.  The business has continued in the Pennington family since the 1950s and is on its third generation of Penningtons to own and operate the family business.

The funeral home supersedes its importance as a long-time San Marcos business, but to the story of funeral homes in small towns in Texas. The funeral home is listed as number forty-two for their pre-need trust and have been a part of the National Burial Association since 1903. Funeral homes of this age often included the home or apartment of the owners in the same residence. Shane Glosson who is the current owner and grandson of Edra Pennington, remarks on how he himself grew up in the business and lived in the apartment above the funeral home. The Pennington Funeral Home has donated their historic funeral ledgers to the University Archives at Texas State University which date back to 1888-1944. Within these funeral ledgers, a reader can find anything from a detailed description of the deceased, to the small entry of just a race and gender. With fourteen ledgers in the collection. I chose to focus on three different ones, the 1915-1917 ledger, the 1920-22 ledger, and the 1931-1935 ledger. By choosing these three, there is a clear progression of what all is included in the ledger, from prices, to addresses. As well as a production of ledger books meant and designed for funeral homes. There is also an evident piece of the story missing. The continual information of those who were not white. At the time when these ledgers were written, this information would not be shocking to not find. But today, it is important to recognize the differences, and as a historian, it is our job to tell untold stories.

Starting with the 1915-1917 ledger, I simply began my exploration by scanning the entries and quickly recognized the distinction not even of race, but those were entered by their name and then those who were nameless. Located in the picture, the first entry simply says “Mexican girl” followed by the person who ordered the funeral. The right side of the ledger then shows the pricing for different services offered by the funeral home. Not only is there the “Mexican girl” but there is simply “mex child,” “Mexican,” and even “negro” and “negro boy.” What this tells us is that the funeral home was not limited to whites only, but there is a clear distinction in their clientele and how they are viewed. Those with actual names listed often have flowers, carriages, and other things added onto their funeral costs than just the funeral itself. This trend is continued throughout the eighty-plus pages of the ledger and is not just limited to this page. It would be near impossible for historians and researchers to discover not even the stories, but just the name of these nameless. 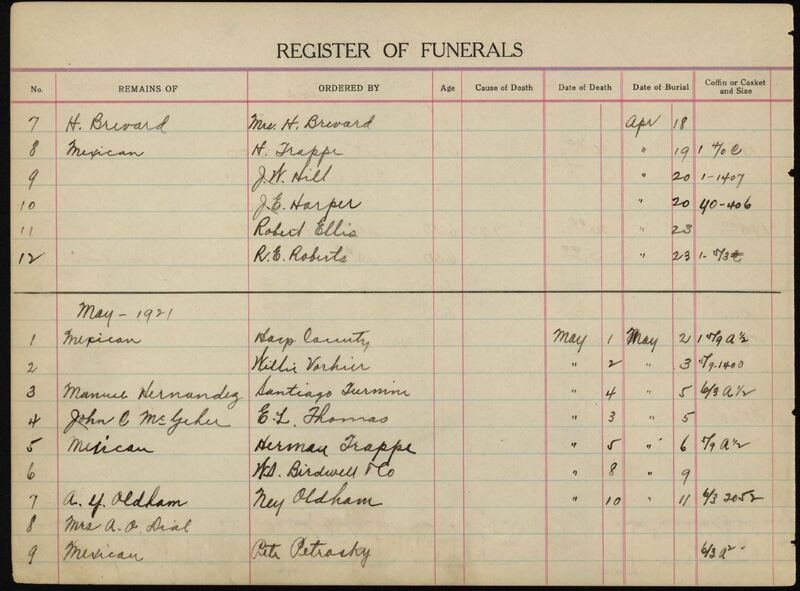 The next ledger I worked with was the 1920-1922 ledger. Just a short three years since the last register, would show a similar style in the ledger book design, as well as what type of information would be included. This ledger would include many more names than the 1915-1917 ledger, but still would have many entries of “Mexican” or “Mexican girl” etc. like the previous ledger. Although there is not more information to go off of, it is important to note that the two are eerily similar. On another note, one thing that is interesting regardless of what race the individual was, there is no entries for cause of death. 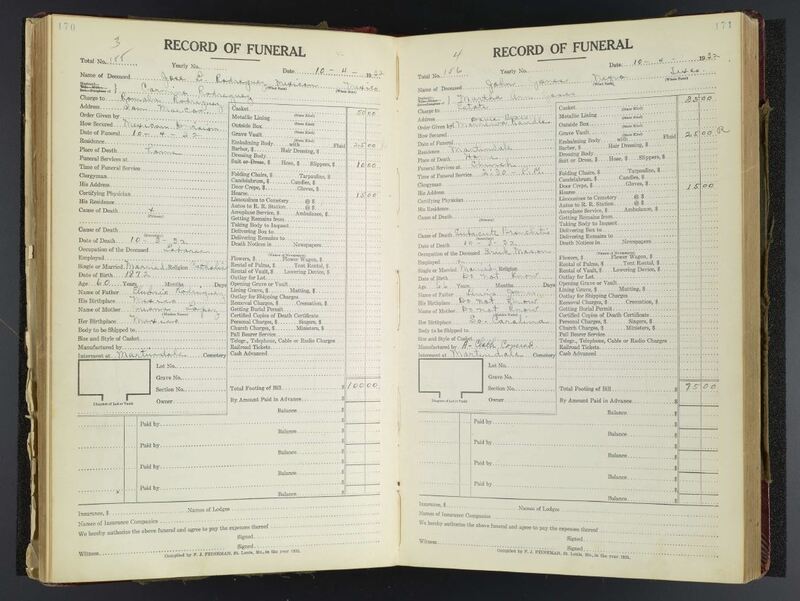 The final ledger I examined is the 1931-1935 ledger. I chose to skip roughly ten years in hope for finding more information about an individual. These hopes were answered and the layout and design for this ledger is much more complex than the previous two. Rather than a single line per individual, each individual now has an entire page with different information that pertains to their personal information, as well as the funeral information. I couldn’t help but smile at the goldmine this is for researchers as now there is a way to expand the story from just a funeral ledger, to discover the untold stories of each person. Despite the advancements in the design of the books, the lack of information for those who were not white is still there.

Those who were not white, had more information than they had in the past, but still a distinct lack compared to their white counterparts. In this ledger as well there is new information as to where each individual was buried. With this new information there is also the evidence of how the San Marcos cemetery was a segregated cemetery with a majority of Hispanic individuals being buried in Kyle.

There is so much more than can go into the stories of these ledgers. As historians, we hold the key to unlocking and shedding light to the darker side of stories, as well as beginning to uncover the hidden stories of individuals whose voices have not yet been told. The story does not end with just the historical document, because inside is a hidden treasure trove of people who have not been forgotten, but just have been waiting for you to unlock their voice with that key in your hand.

Side note: I plan on turning this into a side project where I would like to research as many people as possible from the 1931-1935 ledger and do more digging in the other ledgers. Although these are public record, I am stating that I plan to work on this project at this time.