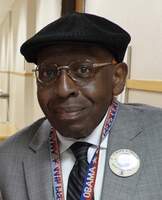 Elvin Holt Drive on the Round Rock Campus is named for Dr. Elvin Holt, Professor Emeritus.

The first tenured Black professor in the Department of English, he taught from 1983 to 2020 and earned multiple teaching awards in his 37 years at Texas State. The street was named for him in honor of his work in multicultural curriculum development.

He earned a bachelor’s degree in English from Prairie View A&M University, a master’s degree in English from Southwest Texas State University, and a Ph.D. from the University of Kentucky in Lexington. He was one of twenty professors selected to participate in SWT’s first yearlong Excellence in Teaching and Learning Seminar. Dr. Holt has received three fellowships from the National Endowment for the Humanities, and he was named Professor of the Year by the Association of Black Students in 1989. He was selected as an Alpha Chi Favorite Professor in 2015. Dr. Holt received the Dean's Excellence in Teaching Award in 2009.

Dr. Holt’s research, publications, and conference presentations focused on African literature, African American literature and cultural studies, folklore, and children's literature. Also, he developed and taught courses in the Honors College. Dr. Holt was the first African American tenured professor in the Department of English. Additionally, he is co-editor of Acting Up and Getting Down: Plays by African American Texans and co-author of Stages of Struggle and Celebration: A Production History of Black Theatre in Texas (with Dr. Sandra Mayo).  Both books are available in the Alkek Library.

Dr. Holt has served both within his academic community and the larger community, including serving on numerous committees at the department, college, and university levels, as well as serving as a member of the Heritage Association of San Marcos, the San Marcos Historic Preservation Commission, Hays County Historical Commission, LBJ-MLK Crossroads Memorial Committee, and the San Marcos Sesquicentennial Commission. For several years, he served as a Sunday school teacher and brotherhood president for First Baptist Church (NBC), and he has served as secretary for the Pride of San Marcos Lodge No. 494 PHA for more than 30 years. Most notably he is an original board member and former secretary and past president of the Calaboose African American History Museum in San Marcos, Texas. 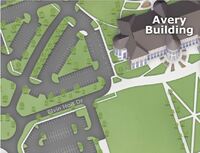 A Street on the Round Rock Campus is Named